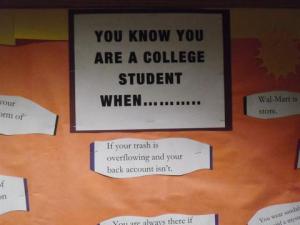 November 30th, 2012. It was a Friday. It was also the day when I was going to find out if I was matched to a school through QuestBridge. I had dragged my friend from lunch to the counselor’s office earlier that day so that she could be there for whatever news I would hear.

I found out… that I was too early.

So, I had to go through the rest of the day as normal, not knowing when I’d be notified. Answer me this: how can you go through a day like normal when you were going to find out the results of all of your hard work? Melodramatic? Please. I’m never melodramatic. This. Is. Serious.

I was supposed to go caroling with friends at a hair salon later that night, which I was very excited for, but I just wanted to know as soon as possible what my future was going to be.

At that, we should back up. What was this process that put me in such dire straits? What was this journey for me? It started as soon as senior year started. As someone who had been facing a lot of setbacks personally and financially, I knew that the college search was going to be much different for me than for other people. Although I was a “quirky, high-achieving student near the top of my class that desired and needed one-on-one top notch instruction surrounded by similar peers”, all of the schools that would have been perfect for me were way too expensive. I knew more than anything that I needed to get away from my home, though. So I needed to find any way possible to make my dreams come true. That’s when my counselor, who was and continues to be like a mother to me, told me about QuestBridge. If you all are reading this, then you probably know what it is, but I will say that anything that has the capability of giving low-income high-achieving students the ability to go to college was something I could not pass up. My counselor and I went through the process a bit cautiously since according to her, no one from my high school had ever been matched. I had to do my best on all of the applications for QuestBridge, but I also had to understand that I needed to have other options as well.

Because of how QuestBridge works, you cannot apply early decision to any other school, and there are strict limitations to the schools you can apply to. I was able to apply to the University of Iowa because they used rolling admissions, and after self-reporting all of my scores, I found out in two days whether or not I got in (I did). It was the epitome of a safety school. I knew that my grades were good enough to get in, it was close enough but still far enough from home, and my voice teacher had told me that I could get a lot of good music experiences there.

I did not want to go there. I was so grateful to be accepted, but that was not the type of school I would have wanted to go to.

Meanwhile, I got my teachers and my counselor to write my recommendations (which I wish I could read SO BADLY…) and I ranked my schools. And imagine how excited I was to learn that one of my dream schools, which shall remain unnamed (Northwestern) was one of the partner schools. I instantly listed it as number 1. I also listed Yale, Columbia, and Brown. And then I saw Oberlin. And I didn’t know much about Oberlin at the time, but I knew that it was near Cleveland and that it was a great music school. So, I decided to add it, because at the time, I thought that I was either going to be a musician, or go into music therapy.

At the same time, I prepared applications for the Common App (which I couldn’t submit) for a bunch of schools. I had visited one other school, which was probably going to be the school I would have applied to if QuestBridge didn’t work out, which shall also remain unnamed (Lawrence University). I prepared applications for Lawrence, Sarah Lawrence, Howard, and the schools I would have applied to through QuestBridge.

Time came and went. Then I found out that I was a Finalist, one step closer to being matched. I was given the ability to change my rankings. I had done more research, and I realized that as much as it was my dream school in the past, I didn’t want to go to Northwestern at this point in my life (in my long 17 years of life). I wanted a small college so that I could feel like I belonged, so that I wouldn’t get lost, and so that I would be forced to confront things about myself in order to grow as a person. So I didn’t just change Northwestern’s ranking on my QuestBridge list — I got rid of it completely, along with Yale and Columbia. I realized that Oberlin was more than just a music school, but also a really progressive institution, and even though I still did not know much about it, I decided to rank it as my number 1, with Brown as my number 2. That was a scary decision that I made on my own. I had ranked the colleges on my own in the first place, but this was something else. I wasn’t completely sure how it worked, but I figured that I was limiting my chances even more from getting matched. I decided to stick with my guns, and see what would happen.

November 30th came. It was the day before my younger sister’s birthday, so she and my dad were out shopping. I was home alone, nervous, full of anticipation. I was eating Oreo’s and checking my email when it happened.

I could have died. The Oreo’s were tasting a bit stale…

Also, I got the notification that I should check my QuestBridge account.

My heart was racing. I went to the site. I typed in my password (which ironically was based off of a lyric that went “Quieting the beat of my heart”). I was told again that there was a notification. I clicked on a link.

“Congratulations! You have been accepted to Oberlin College.”

I screamed. Which was fine because there was no one at home. It happened. All of the struggles of filling out financial aid forms (a lot of times by myself) and getting teachers to submit their recommendations on time and answering essay questions and dealing with peers struggling with similar issues but knowing that while similar, they could never understand what I was going through paid off. I called friends, I went caroling and got paid, and went with my best friend to get late night dinner. My father was happy for me, even though I had to correct him on the pronunciation of Oberlin several times (and still sometimes have to) since he had never heard of it. Then I realized I didn’t know what I was getting myself into.

In April, I was flown out to Oberlin along with the other two matches, as well as the 2017 members of Posse, another scholarship program. The members of Posse knew each other very well, since that was the point of the program. I had never met the other two matches, although I did do some internet stalking when I found out who they were, and felt slightly inferior. I had never seen Oberlin, even though I could brag about how I knew I was going there with a generous financial aid package back in November. And while I was happy knowing that I didn’t have to deal with all of the issues of getting accepted that many of my friends were dealing with starting in December, I was still affected by a horrifying thought.

What if I hated it?

What if I was stuck at a place that I didn’t want to be at? I couldn’t just change places, and even if I could, where would I go? This was supposed to be my match, the place where I was going to thrive. What if I wasn’t good enough?

As soon as I got there, all of those fears were erased. I felt like I belonged there, and I did meet the two fellow matches, one of whom is now my best friend. I found myself wanting so badly to be a part of Oberlin, which is the case for any good visit to a college, but I was already guaranteed to go there, so I just had to wait. So the summer came. Graduation parties galore. My friends were the entire spectrum of post high school choices, with some going to their dream schools, some going to their safety schools, and some going straight to work. My best friend took a gap year. I had to think about what that meant knowing that I had something that so many other people didn’t have, amazing access to higher education and the chance to craft a new life for myself. And I walk and act and breathe on this campus every day knowing that.